It’s a Chinese name for a Panda.

It looks like Mozilla’s Firefox will reach one million downloads within two weeks. Currently 58% of the visitors to this site is using Safari, 20% IE and 1% OmniWeb. Firefox has grown from 12% to 17% in the last three month. 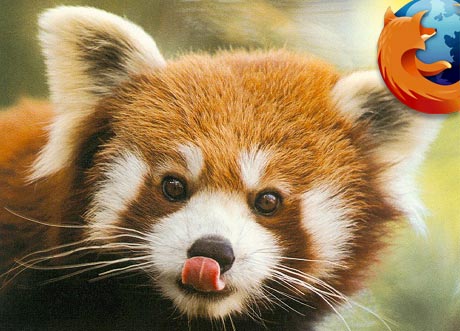 Red pandas look more like raccoons than their closest relative – the giant panda. They are secretive and gentle creatures, spending most of the day sleeping curled up with their tail wrapped around their head.

Physical Description: Red pandas have a bear-like body with thick russet fur. The belly and limbs are black and there are white markings on the side of the head and above the small eyes. They have thick bushy tails with light-brown rings, pointed ears and a pointed snout.

Behaviour: Red pandas lead solitary lives, except for mothers with cubs. They are slow-moving on the ground but are remarkably agile in the trees.

Reproduction: Females give birth to 1-4 young, after a gestation period of 112-158 days.

Conservation status: The IUCN classify red pandas as Endangered, and they are on CITES: Appendix I. They are protected in Nepal and China. Habitat loss is thought to be the major reason for their decline in the wild.

Notes: Unlike other bears, their claws are partly retractable.