If you have heard about the popular American animated television show VeggieTales, then you should be familiar with this popular image macro taken from the show. This image depicts three talking scallions saying the phrase “Allow us to introduce ourselves,” which has later been used as a punchline for various jokes.

This popular phrase made an appearance in a VeggieTales episode titled “Madam Blueberry,” which was aired on the 21st of July in 1998. In this scene, three scallions, who were attempting to be salesmen, tried to manipulate a character named Madame Blueberry with a song. This song started off with the well known line “Allow us to introduce ourselves.”

About 10 years later, a VeggieTales fan account uploaded this song as a clip to YouTube, receiving more than 100,000 views in a year and a half.

The following year, this image macro was posted online in regards to a joke about men approaching women online. This image received more than 1,100 up votes and sparked a rise in this meme. In the next few days, users began to re-post this popular line while editing their own jokes and content into it.

Redditor The_Salty_Car posted their own variation of this meme, gaining around 13,000 pints and receiving over 95 comments in only three days. The posted meme is shown below. 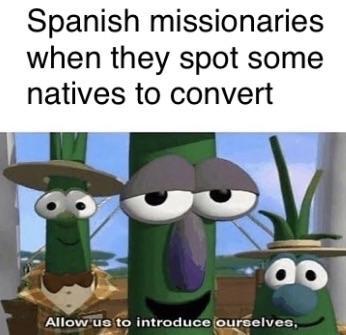