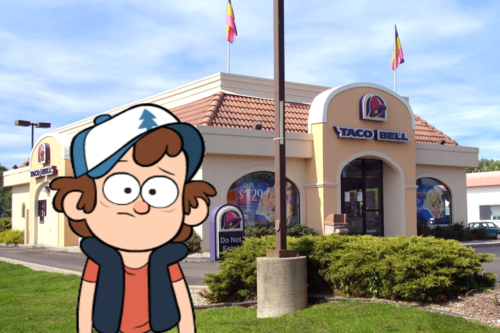 “Dipper goes to taco bell” originated as a fanfic, coming from a 2012 animated cartoon series called Gravity Falls. This story became famous within the fan base due to its gore-filled narrative. In august of 2012, “Dipper goes to taco bell” was posted to an online fan-fiction database, Fanfiction.net. Around 7 days later, it was removed due to adult themed content that violated the sites terms of service, and was replaced with a Code 1 message.

This story is centered around the character Dipper Dines, from the series Gravity Falls, and his visit to Taco Bell. When he arrives at the restaurant, he orders a taco, takes a bite and instantly suffers from diarrhea. When he makes it to the bathroom, he unexpectedly gets turned on by his feces and other bodily fluids. Shortly after, Dipper cuts himself and dies from blood loss. Later in this series, his twin sister Mabel finds Dippers corpse and ends up getting killed by a Taco Bell employee. This employee then cleans up the bathroom stalls and quickly disposes the two corpse by turning them into tacos.

On August 24, multiple reaction posts, pictures and videos involving Dipper going to taco bell began surfacing on popular social media platforms such as Tumblr, YouTube and SoundCloud. The original fanfic was then re-uploaded the next day to a site called Pastebin. Many fan art illustrations started to surface on Tumblr, featuring photo shopped images and drawings of Dipper outside Taco Bell.

A few phrases were also taken from this fanfic and instantly gained popularity. The most notable phrase was “AHA HAHA HA HAHA HA HA” said by Grunkle Stan,  and “HALP! I BIT MY DICK OFF!” 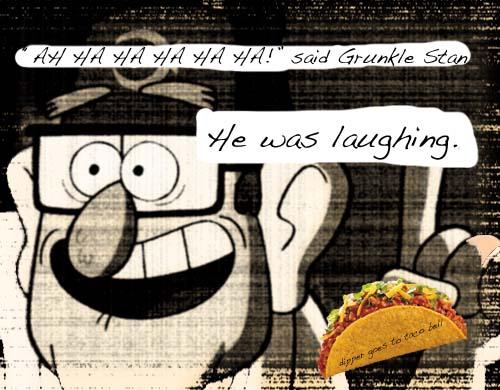 This re-posted fanfic was met by shocked and gruesome reactions, which were found under the tag “Dipper goes to taco bell” on sites such as Tumblr, YouTube and DeviantArt. On August 26th, a user by the name of Morearmsthanyourbodyhasroomfor, posted an image of Uncle Stan drawn in the style of Shit, i’m late for school photo fad, reaching over 2,400 notes in the first few days. A response post was made on August 29 stating “I’m gonna read dipper goes to taco bell” reaching over 1,600 notes within the first 48 hours.

A day later a remix song, based off the main Gravity Falls theme song and an electronic Taco Bell tune, was created by a Tumblr user named Drawingguitarist. This post got over 2,700 notes and 10,000 plays within the first two and a half days.