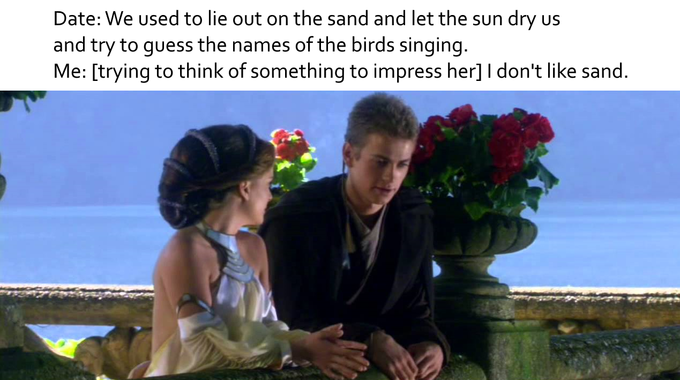 “I don’t like sand,” the memorable quote from Star Wars: Episode 2, Attack of the Clones is spoken by Anakin Skywalker. This line stirred up a lot of negative criticisms for this prequel among Star Wars fans online. In this scene, Anakin Skywalker is in charge of protecting Senator Padme Amadela, who he later ends up falling in love with. During one of their many meetings, Padme is talking about her love for her planet when Anakin responds with “I don’t like sand. It’s coarse and rough and irritating and it gets everywhere. Not like here. Here everything is soft and smooth.” Absolutely ruining the romance.

Film critic Roger Ebert cited Anakin’s line as a perfect example of the films romantic subplot issue, screenwriting and acting. He states that the film spends the rest of the time “Over a romance between Padme and Anakin in which, they’re incapable of uttering anything other than the most basic and weary romantic cliches. There is not one romantic word they exchange.”

Following the films release, this line has been named one of the worst parts of the second episode. In 2002, the website ChefElf.com included this unfortunately famous line in their list of 64 reasons to hate Star Wars. Fans responded to this hate with their own memes filled with puns from the movies including “I find your lack of faith disturbing.” 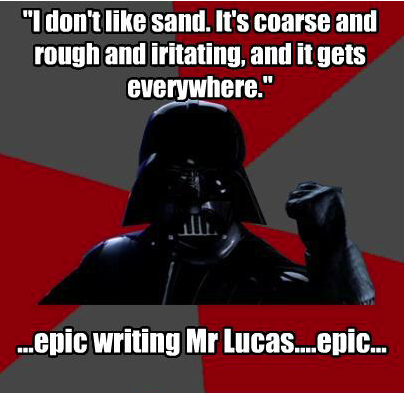 In April of 2015, “I don’t like sand” was a frequently used subject for parodies on Youtube. Andy Pratley, a YouTuber, re-edited the final scene of the second Star Wars episode, adding lines over Padmes head. This video has gotten over 134,000 views.