This memorable quote was spoken by the character Spongebob, from a widely known Nickelodeon animated series Spongebob Square Pants.

In October of 2001, a Spongebob episode named “Squid on Strike” was aired in the United States, where Spongebob protest against his employer Mr. Krabs. He calls the Krusty Krab unfair and is overheard by Mr. Krabs, who was visibly unhappy hearing this.

After this episode aired, 3 years later it resurfaced as a remix posted on Youtube by user hnmv. This video included this phrase and was added into a Sparta remix, receiving over 17,000 views. This same clip was also turned into a Vine, made by multiple different users.

The most popular version of this clip as a Vine was posted by NaturalExample, remixing this song with a new beat, gaining more than 64,000 loops and almost 1,000 likes.

On September 27th, 2016, a screenshot was posted on Tumblr from a Fox News broadcast with an individual holding up a sign with this popular quote “Krusty Krab is Unfair!” This post on Tumblr received 127,000 notes in three years. 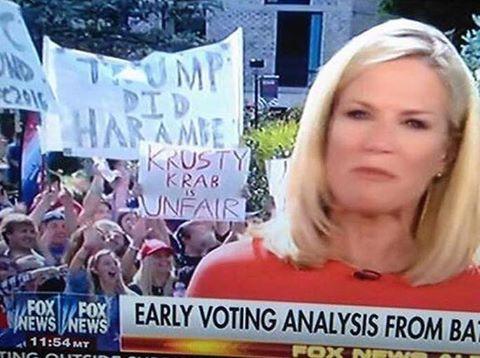