This image macro with the well-known quote “My disappointment is immeasurable and my day is ruined” comes from TheReportOfTheWeek, in regards to his review of Popeyes Cheddar Biscuit Butterfly Shrimp. On July 4th, 2017 TheReportOfTheWeek reviewed this dish from a popular food chain called Popeyes, and after taking a bite, the host of the episode says this line. The original video has gained over 500,000 views.

After this video appeared online, the quote was taken and made into an image, currently used as a reaction image to express disappointment.

Immediately following the posting of this video, a screenshot of this quote was uploaded to TheReportOfTheWeek’s website, and gained over 210 up-votes. On August 14th of the same year, a fan on Youtube posted a montage video featuring this clip, which received over 440,000 views.

In October of 2017, another screenshot of this moment was posted, gaining over 2,100 up-votes. This screenshot is shown below. 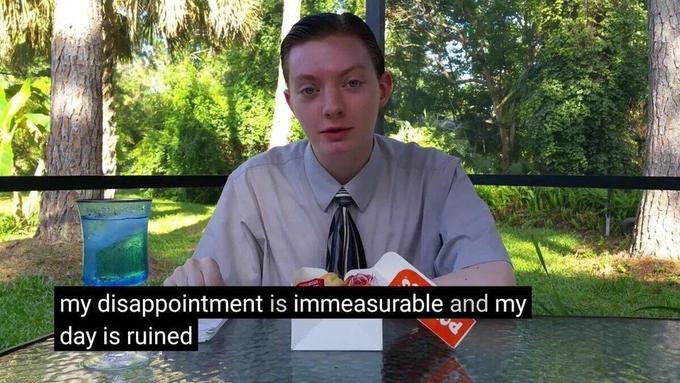 This image would later be used with multiple different captions to express disappointment. This image hit Reddit in December of 2017, using different dialogue, but still receiving many up-votes by fans.