“This aint it, Chief” is a well known phrase used to express disinterest over posted content, or to describe the posted content as lame. This phrase is also used in a friendly yet insulting way, similar to the expression, “Imma keep it real with u chief.”

This short phrase became popular around the summer of 2018, and later that year made its first appearance on Urban Dictionary. 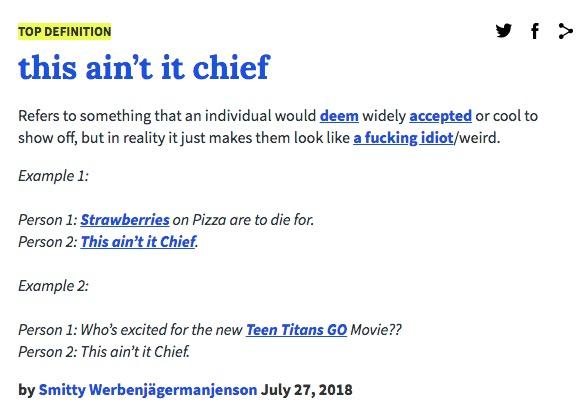 After its initial debut in the summer of 2018, popularity over this quote skyrocketed. This phrase is mostly used on the internet to mock something or someone, ultimately used as a troll over their statement or post. A good example of this occurred on July 23, 2018, when twitter user @desusnice used an image of this quote in response to a song by R. Kelly, generating over 2,400 retweets and over 9,700 likes.